From Grey Hack Wiki
Jump to navigation Jump to search

The Banking system allows for sending, receiving and spending money in Grey Hack. New users must register for a bank account; the only requirement is that the user already has a Mail account. 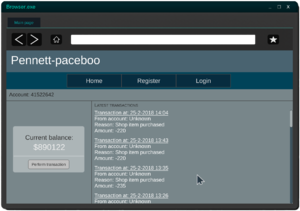 Users are permitted one bank account, which is then used when making online purchases from Shops and Hackshops. Users may send and receive money to and from each other by logging in to a bank website. Currently, all bank websites operate the same and it doesn't matter which bank site a user logs in to; valid credentials are accepted on all bank sites.

Money can currently be earned by completing missions or hacking bank accounts. In Grey Hack multiplayer, the user's starting balance is currently $325 (or $650 in the nightly build). It is also worth noting that when caught in multiplayer, the player can still log in to their previous bank account (providing they know the credentials) and will thus be able to transfer their old balance to their new game.

There are a large (unknown) number of NPC bank accounts in Grey Hack, the credentials for many of which can be found on NPC Servers. When accessing an NPC server, the user is advised to look for files entitled Bank.txt; these are often located in /root/Config and /home/Username/Config.

Bank.txt files may be deciphered to reveal the password to that bank account. There is currently no form of tracing for bank transactions, and so once logged in, funds can simply be wired to the user's own bank account. Credentials are best kept for future use, as currently, NPCs receive salary payments once every in-game month, so the player can return later for more funds.

There is currently (as of Public build 0.6) no gain from hacking in-game banking servers, as the files are temporarily useless. This is due to the lack of ability to get any details from the servers. The files inside a bank server are as followed: Transactions (assumed to just be fillers), the required server files to run the website and bank_accounts port, and possibly working home directories in /home/.